As a result of the great resignation one year ago, Meyer-Shipp sent her youngest of three sons off to college and she found herself exhausted and reflecting on her 25 years of “grinding it out in corporate America.  ”Having navigated the trials and tribulations of the pandemic and the slew of unjustified murders of Black people across the nation, as a mother, as a woman of color, and as a DEI and HR leader, she made a decision that she wanted to help individual human beings who are marginalized find a path to economic independence, security, and stability.   It was then, that Meyer-Shipp decided to step down from her position at Major League Baseball and take some time off to reassess her career and determine the next chapter in her journey. 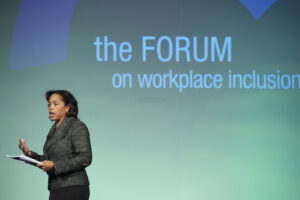 During Meyer-Shipp’s sabbatical, she engaged a career coach and a life coach, both of whom who administered skills and personality assessments which pointed to consistent results to help her determine the next step in her journey to career growth and fulfillment.  The keyword that appeared in each of the assessments completed by Meyer-Shipp’s was “Caring.”  This left Meyer-Shipp convinced that her next job had to be with an organization whose mission is to have a direct impact on supporting those in need each and every day.   In essence, while she had worked for great for-profit organizations in various leadership roles, she recognized that it was time for her to use her skills, talents, and capabilities to help and support those who are most vulnerable in ways that better reflected her caring nature. During this time off, Meyer-Shipp politely declined opportunities for several c-suite jobs in corporate America and instead decided to spend time in reflection on her life‘s purpose and explore roles that might allow her to fulfill that purpose.

A few months later, Meyer-Shipp knew it had to be serendipity that led a recruiter to call her to see if she might be interested in applying for the position of CEO of Dress for Success Worldwide.   The first time she read the position summary for the role, it brought her to tears as she read the qualities the organization sought in their next CEO, some of which included:

Michele Meyer-Shipp says that every experience in her career has prepared her for this position and the mission is aligned with what drives her at her core. When Michele‘s husband came home and saw the posting he said “this job has your name written all over it.“

Dress for Success Worldwide is a global affiliated network with over 144 offices located in 23 countries around the world. It serves a diverse array of women ranging from high school juniors / seniors to experienced employees looking to return to the workforce after a break, or make a pivot in their careers. Some are women who are recovering from homelessness, human trafficking, domestic violence, addiction, and other crisis situations.

Dress for Success’ offering of free professional attire to the women it serves is just the tip of the iceberg. Dress for Success offers a host of free career readiness and job skills training for women, as well as mentorship, professional development programs, and a network of support via its global online community to women around the world. It has served over 1.3 million women over the past 25 years. Meyer-Shipp has been inspired by personally witnessing the organization’s immediate impact stating “seeing women leave our career centers dressed from the inside and out with their heads held up high as they beam with confidence on their way to that job interview is rewarding beyond words.” 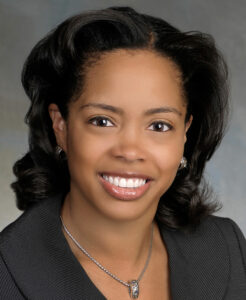 Meyer-Shipp knows a bit where confidence comes from herself. She reflected on her early years in a career as the only woman of color in global and multinational companies, as an intimidating, lonely, and sometimes scary experience. As she progressed in her career, though, she began to know other women leaders and people of color as peers in other corporations. Halfway through her career, she describes having had a “magical moment“ when she realized that “being the person in the room who is different is my competitive advantage and I wear it with pride and not fear.”

Working in financial services, professional sports, and professional services for most of her career, Meyer-Shipp came to see that bringing her new and diverse viewpoints to relatively homogenous senior leadership tables throughout her career allowed her to introduce unique viewpoints, perspectives, and ideas to meetings to others at the table would never have thought of before.  This led to richer conversations and better outcomes. How ironic is it that she is now leading a global nonprofit whose 140+ affiliates are all led by women and serving mostly women.

As the oldest of three girls, Michele Meyer-Shipp grew up in Westbury, New York, where her parents, a banker and a secretary, taught her to be kind, to give back, and to always lend a helping hand. Her family experienced racism and marginalization when they bought land in Long Island to build a brand new home as they made plans to relocate from Brooklyn. They noted that other houses were being built all around their land, but the ground hadn’t been broken yet to lay their home’s foundation in the subdivision. “They don’t want you here” her parents were ultimately told as they started a new home search. At the exclusive all-girls Catholic school, she was one of two girls of color in the entire high school. Her training in law school and 14 years as an employment lawyer have allowed her to work in roles with a focus on guaranteeing that people in her influence and community were being treated fairly and equitably. Her childhood experiences inform her work for equity and justice.

Michele Meyer-Shipp takes pride in the Dress for Success motto “We dress from the inside out (#DressingInsideOut) and states “empowering women gives them back a sense of agency over their lives through a network of mentorship and support so that every woman can feel good in her own skin.” 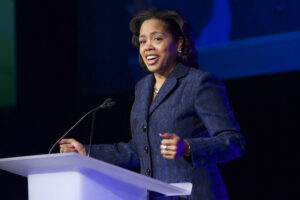 Dress for Success relies on thousands of volunteers every day. Roles for volunteers include career coaching, resume review, interview preparation, mentorship, event support, serving as an on-site personal shopper for clients, clothing inventory management, and fundraising/campaign support.  Anyone interested in offering of their time and talents can learn more via https://dressforsuccess.org/.

After having spent 25 years in corporate America where resources were often readily available, Meyer-Shipp has a newfound respect for nonprofits stating “the extremely limited financial resources, lean teams, and heavy reliance on volunteers, never stops those working across our organization from giving all of themselves to supporting the women we serve. Their commitment to doing life changing, transformative work for women on a shoestring budget is eye opening and humbling; and I have a tremendous amount of appreciation and respect for the nonprofit sector.”

On a lighter note, as far as dressing for her own success, Meyer-Shipp says she is no longer a fan of the traditional business suit. Instead, she appreciates dresses in all shapes and sizes, and she loves wide-leg slacks with an amazing blouse and blazer. She also predicts coming through this pandemic “we’re all giving up heels — we’re never wearing them again – our feet can’t go back.”