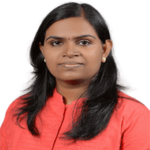 Anju Rakesh, a CBSE national topper, is a computer science engineer from BITS, Pilani—one of the premier institutes of technical education in India. Research had always been her passion and in her career spanning 10 years she has had several papers on women’s careers published in national and international journals. In 2010, she was chosen to present her research paper at AAAI (American Association for Artificial Intelligence), a highly prestigious artificial intelligence conclave in Atlanta, Georgia, USA.

A listed co-inventor of two patents at the U.S. Patent and Trademark Office, Anju’s tryst with ‘gender analytics’ started about a half decade back when the “3 Ms” in her life—marriage, maternity, and motherhood—reshaped her approach toward women’s careers. A second-career woman, she is the self-anointed manager of a gender diverse family comprised of the husband, son, daughter, and herself!

As the lead in Research and Analytics at Avtar, Anju has played pivotal roles in several women-centric studies undertaken in-house: on career intentionality of women professionals, on generational diversity amongst Indian women professionals, and on economic centeredness of Indian women, to name a few. She is also the focal point at Avtar for corporate India’s largest gender analytics exercise—Working Mother & Avtar Best Companies for Women in India study.