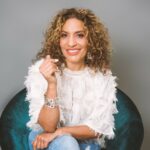 Bacardi Jackson is a managing attorney for a national civil rights organization. She advocates for the rights of vulnerable children in the deep south, including Black and Brown children, children living in poverty, children with disabilities, immigrant children, LGBTQ children, children in foster care, and children being held in carceral settings.

Bacardi grew up in Memphis, Tenn., which then was a city deeply divided along racial lines. Her mother, Susanne Jackson, a lifelong human and civil rights activist, successfully lobbied Congress to take its first-ever stand against apartheid in South Africa and was the principal organizer of the 1967 March on the Pentagon demonstration to end the war in Vietnam. Her father, Rev. James Bevel, was a Freedom Rider and a leader in the Nashville Student Movement, SNCC, and SCLC. He initiated several key historic events, including the 1963 Birmingham Children’s Crusade and the 1965 Selma to Montgomery March that later became known as “Bloody Sunday.” It is no surprise that Bacardi has also spent her entire life as an advocate for justice.

Bacardi earned her AB from Stanford University and JD from Yale Law School. Following a federal clerkship, Bacardi began her legal career as a corporate and transactional attorney at an international law firm. After several years, she pursued her passion for litigation and joined the Labor and Employment team. She continued that work at another international law firm when she moved to Philadelphia. Shortly thereafter, she was recruited by a Black-owned litigation boutique, which became her legal home for 13 years, and where she opened the firm’s Florida office and focused her practice as a trial attorney in the areas of higher education, labor and employment, commercial and complex civil litigation, constitutional law and civil rights, and catastrophic personal injury. In 2018, she returned to her civil rights roots.

Bacardi has always been an active steward of her community, serving as pro bono counsel for several nonprofits and serving on numerous local, state, and national nonprofit boards, including the National Association of Minority and Women Owned Law Firms, Leadership Florida, and the Community Foundation of Broward. She currently serves on the boards of the Broward College Foundation (immediate past chair), the Stanford Alumni Association, and Dialogues in Democracy. She also recently served as co-chair of the Special Council on Equity, Equality and Justice for Leadership Florida. She was recognized as a Florida Super Lawyer for 2020 and 2021, honored by The Sun Sentinel Legacy Magazine as one of South Florida’s 25 Most Influential and Prominent Black Women in Business and Leadership, featured by the Dade County Bar in its Superstars in Trial and she was an inaugural recipient of the Thurgood Marshall College Fund Distinguished Young Leader Award.