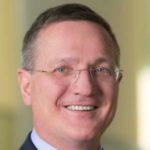 
Post: Podcast Ep. 48: How to Welcome Faith Oriented Diversity in a Workplace: A Better Way
2022 Conference Session: Faith and Belief at Work: A Liability or an Asset? What the Fortune 100 Companies Think! (S3-B)

Brian J. Grim, PhD, is founding president of the Religious Freedom & Business Foundation and works with Fortune 500 companies to include religion and belief as part of their diversity, equity, and inclusion (DEI) initiatives. He is the leading expert on the positive socio-economic impact of religious freedom.

Previously, Brian was chair of the World Economic Forum’s council on the role of faith, a Davos speaker, a TEDx speaker at the Vatican, and director of global religion data research at the Pew Research Center. He is author of scores of academic articles and several books. He was also an educator in the former Soviet Union; Xinjiang, China; Central Asia; the Middle East; and Europe from 1982 to 2002.