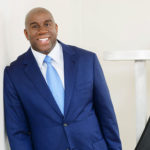 Earvin “Magic” Johnson has successfully parlayed his skills from the basketball court into boardroom as Chairman and CEO of Magic Johnson Enterprises (MJE). Johnson is utilizing those same skills and bringing his winning spirit in his recent role as the President of Basketball Operations for the Los Angeles Lakers. Johnson made history in 2012 when he became co-owner of MLB’s Los Angeles Dodgers. He also co-owns WNBA’s Los Angeles Sparks and MLS’s Los Angeles Football Club. He continues to expand his influence through businesses including: EquiTrust Life Insurance Company, ASPiRE television network and SodexoMAGIC. Through a newly formed fund, Johnson is investing millions of dollars on infrastructure improvement in the United States. He is also one of the leading investors in a number of minority-owned tech companies that include Unchartered Play, ShotTracker, Jopwell, Walker & Co. Brands, and MiTú.