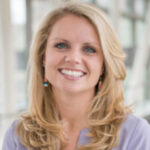 Erin Bailey has been a lifelong advocate for children and health care for underserved communities. She began her career in Washington, D.C., working in federal health policy including advising the United States Senate Committee on Indian Affairs. Erin also launched and served as the inaugural Executive Director at the Center for Native American Youth at the Aspen Institute, which is dedicated to raising national attention to the issues facing Native American youth.

Most recently, Erin served as the Director of Executive Initiatives at Gillette Children’s Specialty Healthcare in St. Paul. As a member of the senior team, Erin worked on a variety of strategic initiatives, including advocating for children who have disabilities and complex medical conditions.

Erin has a Bachelor of Science from Georgetown University and a Master in Public Health from the University of Minnesota. She is a recipient of the Daniel K. Inouye Indigenous Spirit Award and has been awarded the Outstanding Congressional Staff Award from the American Diabetes Association and the National Impact Award from the National Council of Urban Indian Health. She currently serves on the boards for the Center for Native American Youth at the Aspen Institute, National Alliance for Grieving Children, and the Friends of the Saint Paul Library.