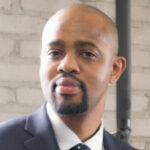 Community leader and entrepreneur Houston White is a creative visionary who brings people, cultures and communities together to elevate one another. Houston is invested in creating a better world, particularly for the Black community, and regularly collaborates with local government officials and business leaders to increase racial equity. The driving force behind his work over the past two decades has been to inspire a renaissance of optimism and action with and for people who believe in vibrant Black futures.

As a kid, Houston began selling t-shirts from his backpack and cutting hair for cash. He was a young go-getter determined to create a future all his own. His entrepreneurial path evolved into adulthood as he began building and renovating custom homes in the early 2000s. In many ways, the process of building a home is reflected in everything Houston does. You start with the foundation and build brick by brick. And that’s what drives him — the potential of the next brick, the next sign of progress, the next spark that might ignite a movement in the hearts and minds and hands of people who believe each of us can be catalysts for change.

In 2007, Houston founded Houston White Men’s Room, a barbershop in the Camdentown neighborhood of North Minneapolis. Known as the Black man’s country club, HWMR is more than a barbershop — it’s a gathering place for community building and inclusive celebration of Black excellence. Over the years, the shop has grown into a vibrant hub for people of any skin color and all walks of life who crave a culture of their own making.

Houston believes style is an act of authenticity, a means of asserting your point of view and bridging the distance between yourself and others. The Houston White brand of apparel and accessories was born to foster a community of people who see strength in cultural collision, who recognize that our differences make us dope, who lead with style, swagger and heart.

As the founder of the Camdentown Business District in North Minneapolis, Houston activates growth initiatives for the community from annual events like the Blues & BBQ Festival to housing solutions that make newcomers to the city feel at home. And he’s just getting started.

Every action Houston takes is rooted in his belief that human connection is the most powerful force in nature, that we are here together to usher in a new era of humanity where we are all united in the pursuit of living our highest good.