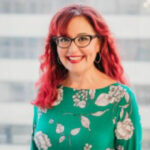 
Webinar: Beyond the Blame Game: Religion and LGBTQI+ Inclusion at Work

Jean-Marie Navetta is the director of Learning & Inclusion for PFLAG National, leading its Straight for Equality program which aims to invite, educate, and engage new allies in the effort to achieve full inclusion for people who are lesbian, gay, bisexual, transgender, and queer (LGBTQ+). She has been the lead architect of the program since its 2007 inception. She was the primary author of “guide to being a straight ally” (now in its second edition), “Straight for Equality in Healthcare” (2010), “be not afraid — help is on the way! straight for equality in faith communities” (2012), and “guide to being a trans ally” (2014). Under her leadership, over 19,000 people have been trained, many in Straight for Equality in the Workplace events across the U.S. in more than 120 major corporations.

In 2011, Jean-Marie was the staff lead in developing and launching PFLAG Academy Online, a monthly web-based learning program for PFLAG chapters to build their skills and understand more about LGBTQ issues. In 2012, she was named a finalist for the Outie Award in the Trailblazer category by Out & Equal Workplace Advocates for her contributions to LGBTQ inclusion and education.

Jean-Marie is the former director of Communications for PFLAG where she increased the organization’s visibility in outlets including The New York Times and “The Oprah Winfrey Show.” She was also Media Relations manager for the American Association of University Women, where her work focused on issues such as discrimination in education, pay equity, and Title IX.

But Jean-Marie is, most importantly, living proof that philosophy majors can get real jobs.