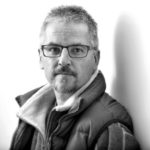 John Noltner has been telling stories with words and images for twenty years for national magazines, Fortune 500 companies, and non-profit organizations. His work has appeared in National Geographic Traveler, Forbes Magazine, Midwest Living, and the New York Daily News, among other publications.

Throughout his career, Noltner has managed logistics for editorial and commercial clients, both nationally and internationally, having worked on three continents. Noltner carefully arranges details and builds relationships with his clients, using humor, understanding, and compassion to craft compelling and insightful stories.

Since 2009, Noltner has been asking people the simple (or not so simple) question, “What does peace mean to you?” for his multimedia arts project, A Peace of My Mind. He has driven 40,000 miles across the country, meeting with diverse subjects, photographing them, and recording their personal stories exploring the meaning of peace. He has included the voices of Holocaust survivors, the homeless, undocumented immigrants, convicted criminals, political refugees and others. The series has been produced as two award-winning books and four exhibits that travel the country. A Peace of My Mind has been presented at the Nobel Peace Prize Forum, The Sojourners Summit for Change, Everyday Democracy, the Peace and Justice Studies Association, the Gandhi-King Conference on Nonviolence and the Dayton International Peace Museum.

A Peace of My Mind represents Noltner’s belief that art and storytelling have the power to transform our hearts as well as our communities.