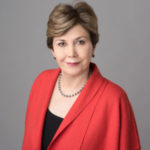 President of the Becoming American Institute, Columnist, and Political Analyst for FOX News

Linda Chavez has served on several corporate boards since 1995. She currently chairs the Compensation Committee of ABM Industries, a large facilities services company that employs 91,000 people nationwide. Chavez has been an ABM director since 1997 and also serves on the company’s Governance Committee. From 2004-2010, she served on the board of Pilgrim’s Pride Corporation and was a member of the Audit Committee. In December 2008, Pilgrim’s Pride filed Chapter 11 bankruptcy; Chavez served on a special committee of the board to oversee the company’s bankruptcy filing and its restructuring. The company emerged from bankruptcy in December 2009, paying 100 percent of its debt and was acquired by JBS USA, one of the world’s largest meat producers.

Previously, Chavez was a member of the board of directors of Greyhound from 1995 until 1999, when it was sold to Laidlaw Inc., and on IDT Capital, a subsidiary of IDT Inc. Chavez is a 2006 graduate of the UCLA Anderson Graduate School of Management’s Director Training and Certification Program. She also served on the advisory board of the Outstanding Directors Exchange in 2008 and 2009.

Chavez has also served in a number of public policy and government positions. She is currently chairman of the Center for Equal Opportunity, a non-profit public policy research organization in Falls Church, Virginia. She writes a weekly syndicated column that appears in newspapers across the country and is a political analyst for FOX News Channel. Chavez has published three books. The Denver Post described Out of the Barrio: Toward a New Politics of Hispanic Assimilation (Basic Books 1991) as a book that “should explode the stereotypes about Hispanics that have clouded the minds of patronizing liberals and xenophobic conservatives alike.” National Review described Chavez’s memoir, An Unlikely Conservative: The Transformation of an Ex-Liberal (Basic Books 2002), as a “brilliant, provocative, and moving book.” Chavez’s third book, Betrayal: How Union Bosses Shake Down Their Members and Corrupt American Politics (Crown Books, 2004), describes how unions divert hundreds of millions of dollars into political campaigns, often without their members’ knowledge or permission, and the public policy consequences that ensue. Her work has appeared in the Wall Street Journal, Fortune, The New York Times, Washington Post, Readers Digest, and numerous other publications.

In 2000, Chavez was honored by the Library of Congress as a “Living Legend” for her contributions to America’s cultural and historical legacy. In January 2001, Chavez was

President George W. Bush’s nominee for Secretary of Labor until she withdrew her name from consideration. Chavez has held a number of appointed positions, among them Chairman, National Commission on Migrant Education (1988-1992); White House Director of Public Liaison (1985); Staff Director of the U.S. Commission on Civil Rights (1983-1985); and she was a member of the Administrative Conference of the United States (1984-1986). Chavez was the Republican nominee for U.S. Senator from Maryland in 1986. In 1992, she was elected by the United Nations’ Human Rights Commission to serve a four-year term as U.S. Expert to the U.N. Sub-commission on the Prevention of Discrimination and Protection of Minorities.

Chavez was born in Albuquerque, NM, on June 17, 1947, received a Bachelor of Arts degree from the University of Colorado in 1970. She is married and is the mother of three sons. She currently lives in Purcellville, Virginia.