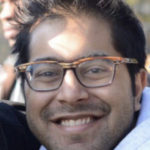 Raafi Alidina, originally from Edmonton, Canada, is a consultant with FrostIncluded. He attended Harvard University for his undergraduate degree, finishing in 2012. After graduating, he stayed in Cambridge for a year as a research fellow at the Harvard Kennedy School Center for Public Leadership. Raafi did his research with Dr. Hannah Riley Bowles on implicit gender bias, specifically in negotiations and in organizations more broadly.

Raafi was awarded an International Development and Management fellowship which sent him to Dhaka, Bangladesh, where he worked with the Aga Khan Foundation–Bangladesh—an NGO that runs preschools in garment factories, tea plantations, and urban slums—helping them improve their gender equality practices. He then returned to academia in the U.S. as part of the Mass Movements Project with Dr. Stephen Kosack.

He then moved back to Cambridge, Mass., to attend the Harvard Kennedy School where he completed a master’s degree in public policy in 2017. For his research on using behavioral economics for inclusion in organizations, and the development of a behavioral measure for inclusion, Raafi was awarded the Jane Mansbridge Research Award for outstanding research on women and gender, and the Susan C. Eaton Memorial Prize for the top master’s thesis in social policy.