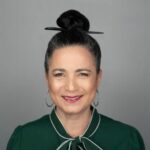 Samí Haiman-Marrero is the president/CEO of URBANDER, a Minority and Women Business Enterprise (MWBE) solution-based agency that assists the corporate, nonprofit and government sectors to overcome their diversity, equity, inclusion, and multicultural marketing challenges. Under Samí’s leadership, URBANDER was awarded with the Orlando Business Journal’s 2020 Diversity in Business “Helping Hand” Award for their caused-based work and its impact on underrepresented and underserved communities.

Samí is one of the nation’s leading experts specializing in the U.S. Hispanic market. Her career started more than 25 years ago working in public relations, marketing, and publishing companies headquartered in New York City. Career highlights include handling the first-ever Spanish language media effort for a U.S. presidential candidate which led to winning the highly coveted Hispanic vote in 1996, becoming the publisher of a national Spanish-language magazine, and being interviewed by international, national, and regional media such as The Wall Street Journal, El Nuevo Día (Puerto Rico), The Huffington Post, Florida Trend magazine, MSNBC, NBCnews.com, and Canada’s CBC News, regarding the Latino experience in the U.S.

Samí holds a master’s degree in communications from the University of Puerto Rico, and was recognized as one of the 25 Most Influential Hispanics in Central Florida in 2016 by VISION Magazine. She has served on several prestigious boards such as Visit Orlando, United Arts, the Hispanic American Professional and Business Women’s Association, the Hispanic Business Initiative Fund’s TAC Committee (Orlando chapter), the University of Central Florida’s Office of Diversity and Inclusion (ODI) Community Engagement Council, and the Hispanic Chamber of Commerce of Metro Orlando’s Supplier Diversity Council. In 2019, she was appointed by Orange County Florida Commissioner Maribel Gómez-Cordero to the county’s Arts and Culture Council, where she also serves as chair of the Diversity, Equity and Inclusion Committee (DEI), and she was invited to be an official delegate of the 2nd Annual Latino Leadership Summit held at the United Nations by the We Are All Human organization.

As a dedicated community leader, Samí co-founded Proyecto Somos Orlando in 2016, a culturally competent community program that assisted survivors and families impacted by the Pulse tragedy. And in 2017, she decided to launch nonprofit organization SOS Orlando after the devastating impact of Hurricane María on her beloved Puerto Rico, which now hosts Talleres de Bienvenida (Welcome Workshops) and The Azalea Project, which she also co-founded. SOS is also the fiscal sponsor of Del Ambiente and Gender Advancement Project (GAP), which focus on providing programs and support to LGBTQ+ people of color, and serves as the fundraising and triage implementation arm for the Casa Culture, and Arts Equity and Entrepreneurship Development Model in collaboration with Black- and Latino-led organizations in Central Florida.

Along with her husband, Scott, Samí is head-over-heels for son Pedro, daughter Catalina, and the family’s Lab/Pit mix, Oreo.