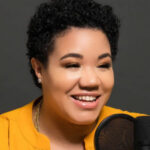 
Post: Podcast Ep. 72: How Different Philosophies of Race Can Help Us Heal

Sheena Mason earned her Ph.D. in English literature from Howard University, her M.A. from the University of Houston, and her B.A. from SUNY Plattsburgh. Before coming to SUNY Oneonta, she taught at the College of William and Mary, California Lutheran University, and Howard University. Her forthcoming book, Decolonizing America’s Raci(al/st) Imagination: an Examination and Critique of Anti-Racist Discourse, is expected to print in early 2022. Additionally, she co-authored “The Harlem Renaissance,” a chapter of the forthcoming Oxford Handbook of Ethics and Artexamining what, if anything, is the proper role of race in the aesthetic productions of or about members of racialized populations. “‘A WHITE SLAVE:’ Albinism in Barbara Chase-Riboud’s Sally Hemings” from Cosmopolitanisms, Race, and Ethnicity(2019) analyzes how race functions as racism in Chase-Riboud’s Sally Hemings. Dr. Mason works actively to decolonize language and, therefore, our thoughts. In “No Malcolm X in My History Text” (2018), she examines the iterations of the folklore figure Staggerlee, the figure’s relation to the public sphere, and racism. Ultimately, she concludes that Staggerlee persists in the American imagination and is a simultaneously and paradoxically subversive and stereotypical figure, highlighting the pervasiveness of racism and society’s response to racism. In her teaching, scholarship, and service, Dr. Mason consistently and unwaveringly promotes anti-racism, though her “anti-racism” necessarily differs from traditional thought and practices.

Her sustained interest in understanding systemic racism and being a change agent for social justice resulted in her primary specialization in African American literature. Her secondary specializations are American and Caribbean literature. Through her teaching, research, and service, Dr. Mason inspires and informs individuals and organizations on anti-racism and provides revolutionary anti-racist initiatives and policy-changing efforts. One of her mantras is “freeing ourselves together,” which she aims to cultivate: healing, unification, and recognition of shared humanity.