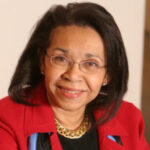 Shirley Malcom is Senior Advisor, and Director of SEA Change, an institutional transformation initiative at the American Association for the Advancement of Science (AAAS). From 1989 to 2018 she directed Education and Human Resources at AAAS where she was responsible for AAAS programs in STEM education, activities for underrepresented groups, and public understanding of science and technology. Dr. Malcom was head of the AAAS Office of Opportunities in Science from 1979 to 1989. Between 1977 and 1979, she served as program officer in the Science Education Directorate of the National Science Foundation (NSF). Prior to this, she held the rank of assistant professor of biology, University of North Carolina, Wilmington, and for two years was a high school science teacher.

Dr. Malcom received her doctorate in ecology from The Pennsylvania State University; master’s degree in zoology from the University of California, Los Angeles; and bachelor’s degree with distinction in zoology from the University of Washington. In addition, she holds seventeen honorary degrees. Dr. Malcom serves on several boards, including The Heinz Endowments and Public Agenda. She is an honorary trustee of the American Museum of Natural History, a Regent of Morgan State University, and a trustee of Caltech; she chairs the board of NMSI (the National Math-Science Initiative) and co-chairs the Gender Advisory Board of the UN Commission on Science and Technology for Development. Dr. Malcom is a former trustee of the Carnegie Corporation of New York.

She is a fellow of the AAAS, Association for Women in Science and the American Academy of Arts and Sciences. Dr. Malcom was a member of the National Park System Advisory Board from 1999-2003. She served on the National Science Board from 1994 to 1998, and from 1994-2001 served on the President’s Committee of Advisors on Science and Technology. In 2003, she received the Public Welfare Medal of the National Academy of Sciences, the highest award given by the Academy. Dr. Malcom serves as Co-Vice Chair of the Societies Consortium on Sexual Harassment in STEMM Executive Committee and was instrumental in the Consortium’s origination.