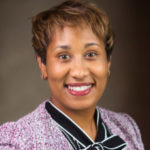 Tawanna is nationally recognized thought leader who is well known for influencing, inspiring and equipping cross-sector leaders to transform a personal conviction for equality into actions that produce equitable and thriving communities.

Tawanna is the founder and chief executive officer of the Center for Economic Inclusion and the executive director of Northside Funders Group, a place-based, collective impact organization of 20 corporate, community and private foundations and public-sector investors committed to aligning investments and strategies to catalyze racial and economic equity in North Minneapolis. Tawanna has led the Northside Funders Group since 2013, and in 2018 she launched the Center for Economic Inclusion, an unprecedented cross-sector social enterprise committed to strengthening the Minneapolis-St. Paul region’s civic infrastructure and collective capacity to disrupt systems and influence market forces to catalyze shared prosperity and advance an inclusive economy.

Before moving to Minnesota, Tawanna was the director of diversity for Cox Communications, where she served as an advisor to the senior management team, assisting in setting the highest standards for business growth, innovation and stakeholder return by ensuring that the company understood and acted upon the needs of diverse communities. Prior to joining Cox, she served as the first executive director for Destination Midtown, leading an unprecedented community economic development public-private partnership. Her visionary leadership led to more than $500 million of re-investment in the historic heart of Omaha in just three years, and also resulted in the development of a model that was later replicated in North and South Omaha.

Tawanna has a Bachelor of Public Administration degree from Washburn University in Topeka, KS. In 2015, she was selected as a part of the Twin-Cities cohort for the inaugural Harvard Business School Young American Leaders Program on U.S. Economic Competitiveness. Tawanna also completed an Executive Certificate in Transformational Leadership from Georgetown University in 2015.

Tawanna’s accomplishments and civic leadership have been recognized with many awards and commendations. A few notables include: Midlands Business Journal’s (Omaha) 40 Under 40 in 2004; prestigious Bush Fellowship by the Bush Foundation in 2014; One of the nations Top 25 Disruptive Leaders working to close racial gaps by Living Cities in 2016; Twin Cities Business Magazine’s 2017 100 People to Know; 2017 Minneapolis- St. Paul Business Journals Women in Business Award Winner, and Minnesota Business Magazines’ 2017 Real Power 50.

Tawanna has lent her leadership to over 35 non-profit and philanthropic boards over the last decade. Today she serves as a Trustee at the Women’s Foundation of Minnesota, board member of the Northside Achievement Zone, Community Advisory Board Member of the Minneapolis Federal Reserve Bank’s Opportunity &amp; Inclusive Growth Institute, Co-Chair of the Itasca Project North Minneapolis Partnership, and Immediate Past President of the Minneapolis- St. Paul (MN) Chapter of The Links, Incorporated.

Tawanna is married to Eric Black and has two children, Traviata (6) and Christian (5).