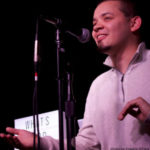 tony the scribe lives in between worlds. Given that he spent his youth shuttling between his parents houses with a book in his back pocket, it’s unsurprising that his work has maintained a focus on the distance between where we are and where we want to be. That work has taken many forms, from rapping, to community organizing, to performance art, and beyond. At present, he’s exploring the frontiers of masculinity as the producer and co-host of “What’s Good, Man?”, a biweekly podcast at the intersection of gender, pop culture, and activism. He lives in Minneapolis, MN, where he writes, produces, practices martial arts, and sometimes even relaxes.