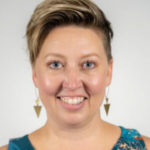 Trina Olson is the next guiding voice in the conversation about the future of work and equitable work culture. CEO and Co-founder of Team Dynamics, Trina believes going to work in America can feel fundamentally different—if and only if—we deal with the impacts of racism and sexism. After the murder of George Floyd, Trina crafted a curriculum for white leaders, including the staff of Senator Bernie Sanders, to process and plan (without burdening POC colleagues).

For the past 25 years Trina has held key leadership roles around the country, in New York, Washington, D.C., Seattle, and Los Angeles; a two-time executive director, she has lobbied the White House, raised millions of dollars, and effectively mobilized for major progressive policy and culture change. Trina has authored numerous pieces on race and gender issues, including “Seeking Safe Haven: LGBTQ People and the American Immigration Experience” (as coauthor). She’s a cohost on the BEHAVE podcast and a highly sought-after workplace equity advisor.