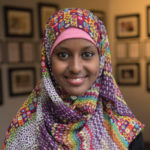 As teens, Zaynab and her younger sister fled the war in Yemen and made it safely to Egypt. After two years of living in Egypt, another revolution started there. Zaynab was granted a visa to come to the U.S. but had to leave her younger sister behind. Two days after landing in Minnesota she enrolled at Wellstone International High School where she started the first women’s soccer team and was the team’s captain. Although she only knew a little English upon arrival, Zaynab graduated in 2016 with a 4.0 GPA. Currently, she is a junior honors student at St. Catherine University, majoring in Political Science, History and Philosophy. She is engaged in voter registration (Civic Engagement Collective), and very focused on her studies as she is pursuing a career as a human rights attorney.

Zaynab and her family’s life experience taught her how to speak up for herself and be her own advocate. Zaynab works with Green Card Youth Voices as the Immigrants and Refugees Youth Ambassador, and is a co-author of the Green Card Youth Voices: Immigration Stories form a Minneapolis High School book. Zaynab also works as a Youth Advocate for girls’ education with the Malala Fund. She has spoken in The United Nations and UNICEF, as well as many other conferences and venues. She and her sister’s story are featured in Malala’ most recent book We Are Displaced, which was published in January 2019.

She is an inspiring leader with a strong voice. She is deeply aware of the struggles she and her family faced as refugees who fled two different wars, and wants to use her voice to build a better world, and inspire others to better their lives by speaking up for themselves. Zaynab believes that one day she and many refugees who were forced to flee their countries will go back, and rebuild their countries.