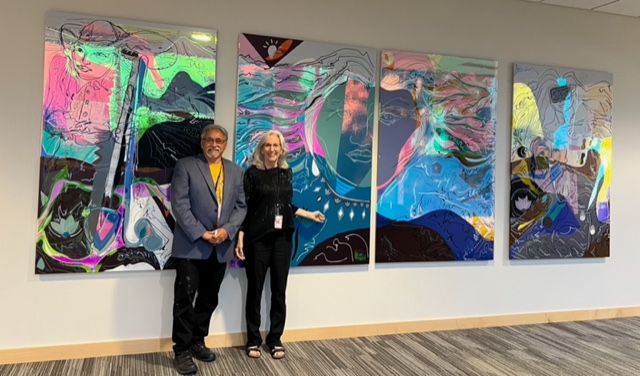 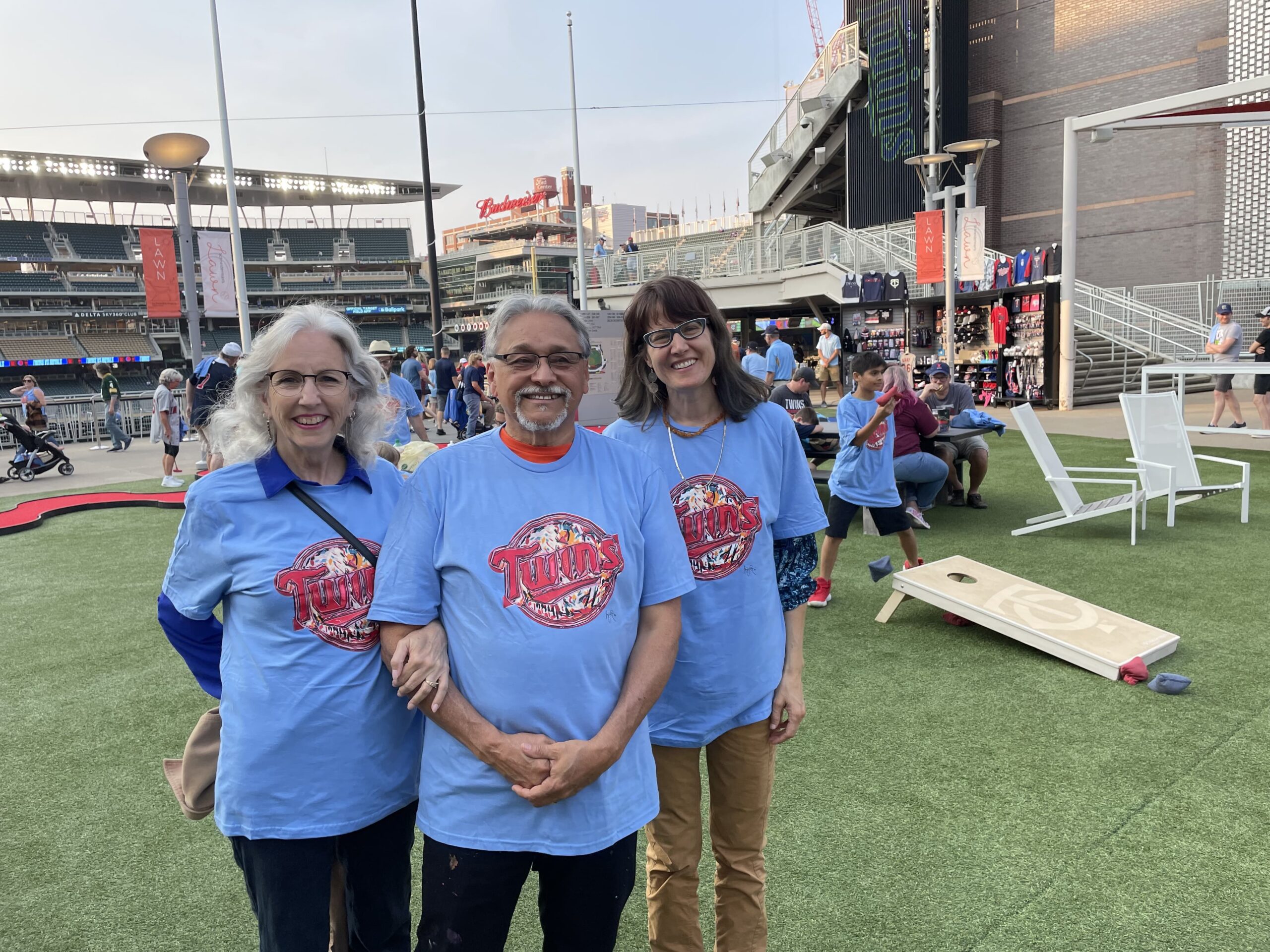 I sat down with Jimmy Longoria and his wife Connie in their home on a Saturday morning, as September light shone through the windows illuminating the array of Jimmy’s portraits in Cubist-Impressionist-mosaic style that grace their living room art gallery. The pieces in the exhibition in the gallery today are all made with 3M materials, including reflective prismatic adhesive products, sola-tube lining, and protective automotive body films in iridescent hues, which are his medium for creating portraits reminiscent of Pablo Picasso, Juan Gris, and Georges Braque. Jimmy is an artist in a variety of media, using paint on canvas, murals, mosaics with plastic film adhesives, and in his home, he displays his signature style of neon laser rays that illuminates their walls, wardrobe, and decorative pillows. This past week to kick off Hispanic Heritage Month, Jimmy’s painting adorned colorful t-shirts for Minnesota Twins fans in the baseball stadium sporting the artist’s take on the Twins logo. During a studio tour, my attention was drawn to wall-hanging agricultural implements, reflections of Jimmy’s work with César Chávez and the United Farm Workers’ movement, symbolic of Dolores Huerta’s powerful chant, “Sí, se puede!” These “palas,” are painted garden shovels that bear Jimmy’s classic lightsaber fireworks on the blade, which hang in the offices of dignitaries in leadership such as U.S. Supreme Court Justice Sonia Sotomayor and Minnesota Attorney General Keith Ellison who have exhibited a commitment to practice their careers with honor and higher purpose. He chooses subjects for the portraits as iconic strong farm/ranch women. 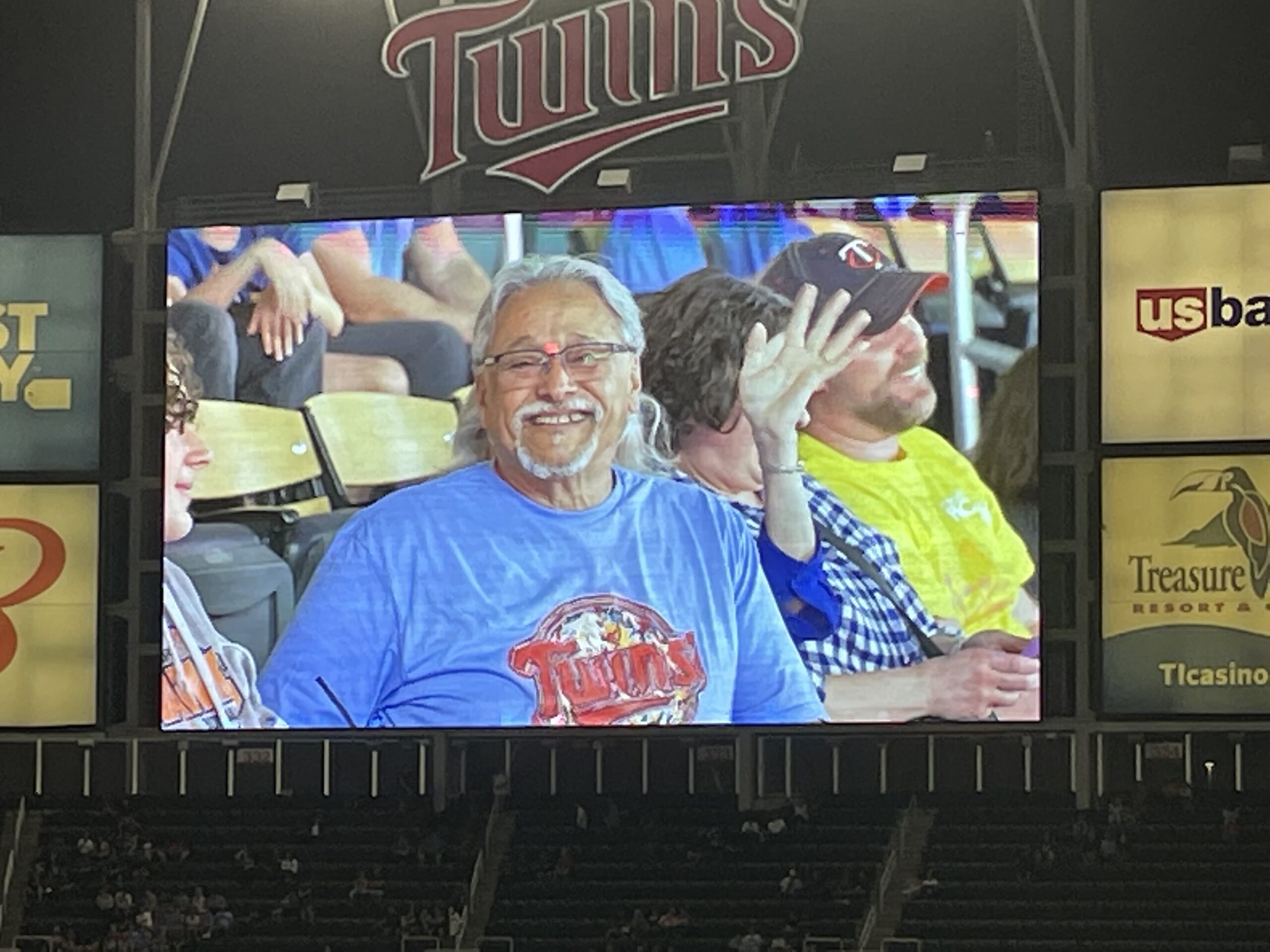 Jimmy at the Twin’s Game

In our conversation, Jimmy was quick to share stories of where his love of knowledge and his quest for creativity took root, deep in the borderlands on Texas soil. Growing up in Edinburg, Texas, Jimmy Longoria was a self-described “brainiac, not a bohemian,” who from childhood was the beneficiary of two libraries, 10 miles apart, curated with books from farm auctions and housed in the hallways of his maternal and paternal abuelos’ homes. His eight full sets of encyclopedias and large reference book collections led him to compare and question their information and to realize, by the age of 7, that what’s written in books can be inaccurate and is the product of different perspectives, biases, time periods, and sources. Sometimes, when one grandfather was out tending the fields and the other abuelo was busy trading horses, Jimmy’s grandmothers would send him to look up facts and quiz him about the flora and fauna of the family farm. There was also, the grand family Bible with a section of illustrations from the Vatican collection. These images, focused on the Renaissance and the base foundations of Modern Western Art ,were also debated. The ability to cross-reference the illustrations with descriptions in the varied encyclopedias introduced Jimmy to understanding that composition and selective utilization of representational technique were the foundations of ART. In his work, the experience of intellectually understanding the foundations of modern art creates the architecture of his current practice. 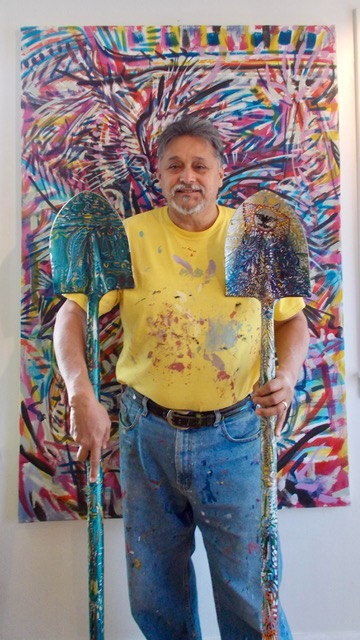 A brilliant child, Jimmy thrived at home and in school, but he says he learned just as much from the land, walking the orchards at dawn, under the silvery grey light under a cathedral of trees, tracking in the ground of his grandfather’s steps, learning to chart a graph in his mind’s eye in the orchard grid that shaped his spatial intelligence. Together, Jimmy’s maternal and paternal grandfathers (who were more than family, they were compadres, cuñados, and good friends to one another) both set their sights on Jimmy, the firstborn of two firstborns, as the next family patriarch, “la Longoria.”

Born in 1954, one year before the racist sign appeared across the country, “No Dogs, no Negros, no Mexicans,” Jimmy was raised by his grandparents with the vision to lead a shift in the culture to oppose hatred and to seek justice and a future through leadership to seek economic parity for Chicanos. He thrived in the tightknit circle of his family. But in 1962, a blast of Arctic air hit Texas hard and destroyed the family’s crops, despite every farm worker family laboring round the clock to tend fires to save the trees and their livelihood. Here, staying up all night as an 8 year old to tend the fires to protect the orchard crops, Jimmy learned the true meaning of solidarity. But despite their best efforts, the orchards were froze dead. Change was on the horizon.

An adventurous grand-uncle on his father’s side had already struck success as a trainer and jockey caring for horses in movie star Jimmy Cagney’s stables in Corona, California. He reported back to the family in Texas about the well-paid jobs with good labor conditions and ample housing working for Hollywood movie stars. So, Jimmy’s two grandfathers moved the entire extended family to California from Texas, just as Jimmy was ready to enter the third grade. They moved to an all-white enclave, where Jimmy was one of three students in a population of 600 students who were not white. Upon entering his new school, Jimmy was required to take orientation assessments, aptitude tests, and psychological exams. Months of walking the orchards with his grandfather had prepared him with spatial facility, and a foundation for math and science grounded in the real world. The results of the tests triggered the principal and vice principal to call a meeting with Jimmy’s parents, which concerned them greatly. His mother wore make up and dressed to the nines, his father wore a suit, to ask if there was any problem with their son. They were surprised and delighted to learn that Jimmy was the only child in his school, and one of 8 total in the entire school district, selected for the Mentally Gifted Minors Program. In this program, Jimmy was trained with federal military funding and with the intention of raising children to compete with East Coast intelligentsia and to out-learn and out-think the country’s “enemies” in the Cold War. When his peers went home at 2:15, he stayed for private tutoring every day until 5:00 PM to work one-on-one with his teachers, who vied for his favor because with a student in the program came generous funds for the school, to be spent at Jimmy’s discretion for field trips, overhead projectors, slides, learning materials, and for his (and other students’) benefit. The school librarian’s budget allowed for Jimmy to have his own shelf of books, and for every book Jimmy selected, the librarian bought 3 more copies of any title he chose to share with the rest of the students in the circulating collection at the school.

Jimmy’s enrollment in an educational enrichment program drew the attention of a group of mentors interested in developing Jimmy’s strategic mind, for the governance of the State of California. At age twelve, he met regularly with political activists such as Pat Brown, the retired Governor of California, Willie Brown, the first African American Assemblyman of the State of California, and a revolving cast of politicos. One assignment was to work with the United Farm Workers to fight for the rights of agricultural workers in Coachella Valley. In the support of the huelga, he was bussed in with a group of volunteers and assigned to serve as documentarian of the worker’s strike (armed only with an empty Brownie camera, no film, ready to take imaginary “photos” when the goons beat the farm workers and their families. César Chávez, whom Jimmy described as “like a saint” to the Union members, shook preteen Jimmy’s hand and commanded him, “Mr. Longoria, do not fail.” Jimmy still carries the weight of those words in his sense of duty to serve the community. In the months after meeting Chávez, Jimmy was asked to repeat the story over and over to his political mentors as they helped him to rehearse for future state-level leadership with eyes on the California Governor’s seat. Jimmy learned to ask himself, “Did you do your job?” Here, he learned to make critical decisions, and to trust his vision of the world. 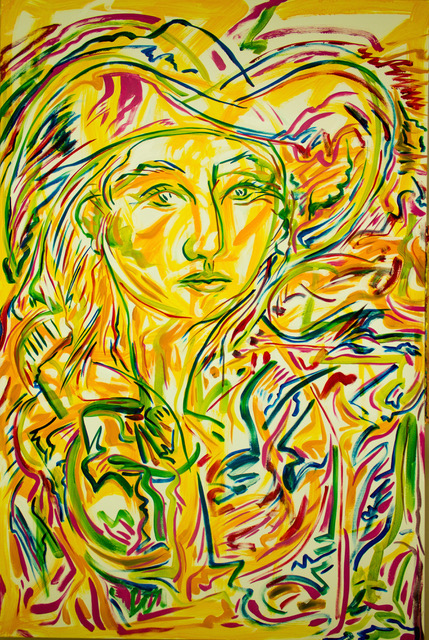 Adelita in the Sun

Fast forward: Now a mentor to the Minnesota artist community, Jimmy often asks himself, “What is my legacy?” Jimmy and Connie Longoria give back to the community to foster peace, social justice, and the arts. Together, they host the second and third-round auditions annually for the Metropolitan Opera serving aspiring singers from around the region. Jimmy has served as executive director of a domestic violence shelter. Jimmy and Connie served as art mentors for eight years in the Hennepin County Juvenile Detention Center, and they believe every high school kid should do their genealogy research to know the periods and key events that have influenced their family history. They believe that in order to be true to oneself, one must know who you are. The tactical strategies that Jimmy learned as a child, raising animals, witnessing negotiations around the farm table, and engaging in activism for the greater good inform his mentoring relationships, and service to the community. His art is the manifestation of giving back to the community.