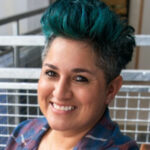 In 2013, Irma L. Olguin Jr. decided to build a company focused on creating a diverse tech industry in Fresno, California, and leveraging a bottom-up approach as the economic driver to reinvigorate the city. In 2019, Bitwise Industries secured one of the largest series A rounds of funding ever for a female-Latinx-led company. Pairing this success with the dogged sense that what she created in the Central Valley doesn’t need to be an “accident,” Bitwise Industries now operates with the goal of building tech economies in underestimated cities across the United States.

As CEO and co-founder, Irma oversees Bitwise Ventures, which houses the company’s portfolio companies, as well as the screening and interviewing of all employment candidates and apprentices for Bitwise Industries. Her goal is to ensure Bitwise remains faithful to its mission of strengthening the tech industry in cities across the country and turning it into a driver of real economic progress for all.