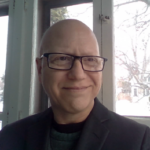 Brent Holt (white male) comes to the world of DEI from the DIY arts world—music, visual arts, and literature. His exposure to cultural differences was received during years of lived experience migrating from one west coast urban center to another, and back sometimes, as well as years of expatriation in Szeged, Hungary.

Of Brent’s 20-plus years at Hennepin County, the past eight have been on the DEI team during which time he has, among other things, played a central role in the development and administration of the county’s NACo (National Association of Counties) award-winning employee resource group program.